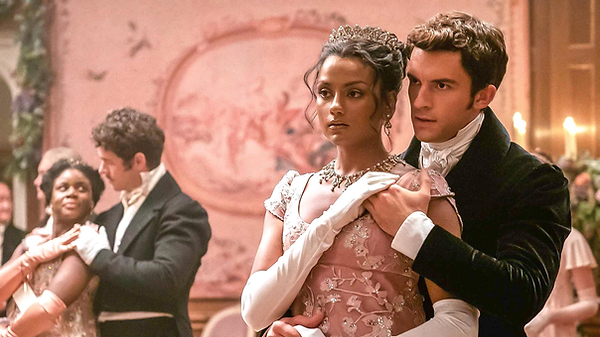 Are you ready for a new season of scandal and intrigue?

If so, you certainly aren’t alone. It seems the world is going mad for the return of the scandalous series which debuted on Netflix on Friday (25th March).

The first season was a worldwide hit when it debuted on the platform in December 2020, becoming one of the streaming services stand out stars.

The Regency-era romance not only exceeded Netflix’s original viewership projections – it blew them out of the water. It became the platform’s most-watched series, with 82 million people tuning in – a whopping 41% of Netflix’s global audience.

While the series received high praise for its storyline, its pastoral setting and detail, the decadent set design gave rise to a new postmodern trend – Regencycore.

But what exactly is Regencycore? Alex Whitecroft, Head of Design at I Want Wallpaper explains it as.

“Regencycore, like its name suggests, is a style that takes inspiration from the beautifully sartorial themes that were popular during the regency era.

Popular elements include an emphasis on light pastel colour coordination, regal patterns, decadent metallics such as gold and silver and luxe accents, and these are notable hallmarks in both fashion and interior design”.

It may feel like a recent fad, but it’s been around for a while as a timeless trend in its own right. Today Regencycore has been brought to life through the use of modern materials and through blending styles to create a truly postmodern style which has soared in popularity thanks to shows like Bridgerton.”

The launch of the 2nd season looks like it has reignited our interest in all things Regencycore, particularly when it comes to interior design.

“With the launch of the new season, we’ve seen a rise in views on vintage design wallpaper and patterns popularised by the show, particularly floral and damask designs as customers look to add character and warmth to their living spaces.”

Wallpaper is a popular choice when it comes to getting that Regencycore look, and for good reason. Cast a scandalous look at any of the beautiful Bridgerton interiors and you’ll see that patterned and embossed wallpaper plays an important part in making the sets look truly stunning.

Damask and florals are a particular favourite to invoke the look, along with a decidedly decadent colour palette that ranges from soft pastels and creams to rich metallics and deep navy blues.

Interested in adding some Regencycore influences to your home?